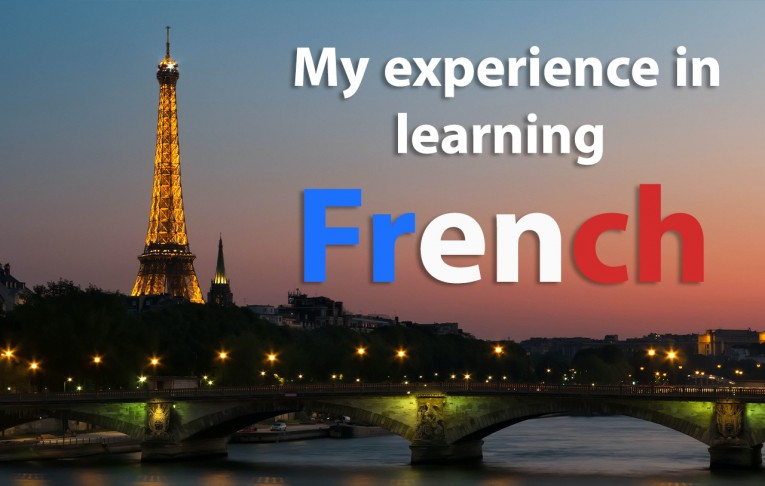 Because of the circumstances of the war in Syria, I had to travel abroad as lots of Syrian, my destination was to France. When I got there, my first problem was the French language, as I had little knowledge about this language, as I was studying English in Syria and I had no grammar or linguistics information or even words in that language so I decided to start studying French.

My journey started with learning French from scratch and I had lots of difficulties as most of the French do not speak English very well, leaving me almost isolated in French society! So I had no solution but to learn the French language as quickly as possible to be able to communicate with others. I thought this was a negative thing because I couldn't communicate with the French people in English but in the end, I came to an important conclusion:

My inability to communicate with French society in another language forced me to learn French and to use it all the time!

And  I made verbal or grammatical mistakes many times but they were correcting these mistakes with kindness and affection and this helped me a lot to speak French.

I will summarize my experience in learning French in the following points:

1- Determine your goal of learning French and the time you need to achieve this goal:

Determining the goal of learning French is very important because this will help you determine the level of the language you need, for example, to complete the university studies you need a higher level of the language than the level you just need for tourism, and also differs from the level you want to work and live in France for example! In addition, you must determine how long you need to reach the desired level.

Learning language, in general, is a very tough task for some people, which leads to the loss of the enthusiasm and the energy over time, so I think the registration in a language learning institute will be very useful because that will help you to stick and to continue in learning the language, and will also provide you with the professional methodology by the teachers, In contrast, many people have learned the language without registering at institutes or hiring a private tutor via the Internet and YouTube channels. It is not impossible but I advise you if you have a specific goal and you have to achieve it at a certain time it would be better to join an institute to ensure commitment and continuity unless you were one of those who are serious about learning languages ​​and who are passionate and committed most of the time.

IF you like to learn French online, I recommend you to follow Learn French with Vincent, I had benefited from this channel a lot, as it explains the French language and its rules in English and one of the advantages of the videos in his channel that it is divided by topic and short videos and his style is simple and professional.

3-Taking advantage of any possible opportunity to speak French:

At the beginning of learning French, I faced a problem of the shame and the hesitation when talking, until I decided to put an end for this problem and I decided to take advantage of any opportunity to learn the language and to speak it and to use it, so I started by asking people on the roads for addresses that I already knew or calling the phone company to ask about the bill or to ask about any advantage, and to talk to my friends who learn French with me at the institute.

I even had a friend from Taiwan, where we always talked to each other in French even though we are fluent in English and it would be easier for us to speak it. Even Our French friends were surprised and they were asking us why you don't speak English between you. He was answering that we are in France and we want to learn French as quickly as possible. Even talking to people who are not proficient in the language is useful because you will learn new words and terms used by these people, but do not learn pronunciation from beginners.

Sylingo also has several tests to study and memorize your words. I was studying a lot of words while on public transport you can try and you will be surprised at how many words you can study while you are in public transportation.

Try to find work no matter what the work is or do volunteer work because it will help you to know new people and to talk to them and to strengthen your language in addition that the working language is considered serious and puts you in situations that force you to speak. In France, I was making donations for UNICEF by convincing people to donate a small amount of money monthly to help poor children to learn and to get the necessary vaccines. I had to practice speaking and persuading others and thus not being afraid and shy when speaking.

At first, that was difficult for me, especially since trying to persuade someone to donate was not easy even if I speak my mother tongue! By my co-workers were very helpful and they helped me in different situations ntil I got used to it and became confident and fluent, which gave me great confidence in my daily life when I speak French.

Sometimes I was watching the American movies that were deluxe in French and sometimes I was watching children's show, for some it will be boring and it won't be fun because you will lose the pleasure of watching the film especially that you will not understand most of the words in the beginning, but with time your mind will get used to associating words with the situations, I was enjoying them and at the same time they benefited me and I learned new words and terms as well as learning spoken language and not only the academic language that I learn at the Institute. While watching the film I extracted the most frequent words that I do not know its meaning and then I recorded them in Sylingo to study them and save them later.

There are also some entertainment channels on YouTube that I would like to watch, such as Cyprien. As the videos in his channel are translated in English, if you have knowledge of English this will help you understand words that you do not know their meaning in French. I found it difficult to understand what he says, especially as he speaks quickly. At first, I watched several episodes and after a month I re-watched them and found that I became understanding them better and I felt the development that happened and this pleased me a lot.

If you want to learn French, I have prepared a series to learn the French language in which I put my previous experience in learning it, you can see it, have fun watching.

I studied Law and MA in Administrative and Financial Sciences at Damascus University and MA in Business and Corporate Law at Jean Moulin Lyon 3 University in France. I also studied programming and work as a web designer in a Swedish company. I have a passion for learning languages and helping others to learn languages.

Upgrade to remove ads  (Only 1.6/month)
Leave a comment Your email address will not be published.
Comments
Soodabe

I wish i could learn French as soon as possible
Thanks for your helpful notes??

Thanks sooo much for sharing ur journey towards excelling in French, and it does give a lot of motivation.


Upgrade to remove ads  (Only 1.6/month)
These articles may also interest you

How to prepare for the TOEFL test
Upgrade to remove ads
Only 1.6/month
Subscribe to our newsletter